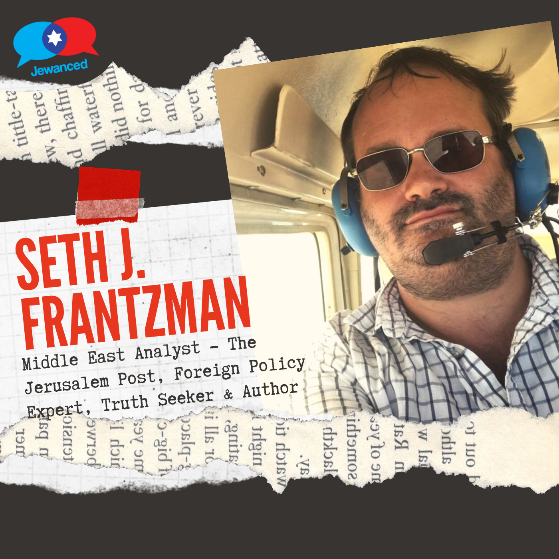 …So Much Trouble in the World…

It isn’t just one of the greatest Bob Marley songs, it’s the truth. We live in a wild place during a crazy time. But, it helps to remember that ‘We Didn’t Start the Fire’…things have by and large been ‘burning since the world’s been turning.’ Only now, we have the added benefit of social media, a decentralized media landscape, echo chambers, clickbait, hardcore polarization, the 8-second attention span, Q, Wokeism, endless conflicts abound (especially in the Middle East) and it just seems like the thing’s starting to spin out of control – so much so that it’s kind of hard to make sense of it all.

This week’s guest, Seth Frantzman, gets up each and every day and tries to do just that – to make sense of the chaos and explain it to the world with proper context, nuance, and care – all with the perfect modicum of outrage, sensibility, and perspective.

Seth J. Frantzman is a Middle East affairs analyst based in Jerusalem. He is the author of After ISIS: America, Israel and the Struggle for the Middle East and ‘Drone Wars: Pioneers, Artificial Intelligence, Killing Machines and the Battle for the Future, and executive director of the Middle East Center for Reporting and Analysis. He runs the Israel Gulf Report, which follows developments between Israel and the Gulf countries, and has reported extensively from and conducted research in Iraq, Turkey, Jordan, Egypt, Israel, and the UAE. A former lecturer at Al-Quds University on US foreign policy, he has a Ph.D. from The Hebrew University of Jerusalem, he writes on Middle East Affairs for The Jerusalem Post and contributes to Defense News and other publications and media.

Our time with Seth on the show was just as interesting and thought-provoking as his articles. Together, we jumped right into some amazing topics such as modern warfare (Seth’s newest book, Drone Wars: Pioneers, Killing Machines, Artificial Intelligence, and the Battle for the Future comes out next week!), contextualizing Israel’s predicament in Gaza, the prevalence of atrocities and Western European resistance to the Nazis, western thought supremacy, the arrogance of some western approaches to Israel and the Palestinians and positive attributes of western culture such as human rights, freedom, and democracy, the cause celebre of turning Israel into a pariah state, progressive politics and false narratives of Israel as a white supremacist, settler-colonialist enterprise, the media’s deliberate omission of Hamas from its coverage of the conflict, the peace industry = war industry, the frequent disingenuity of the Israeli right’s approach to Palestinian national aspirations, Mansour Abbas and Raam, whether Israel’s adversaries (Iran & Turkey) will test the new Israeli government, and much much more.