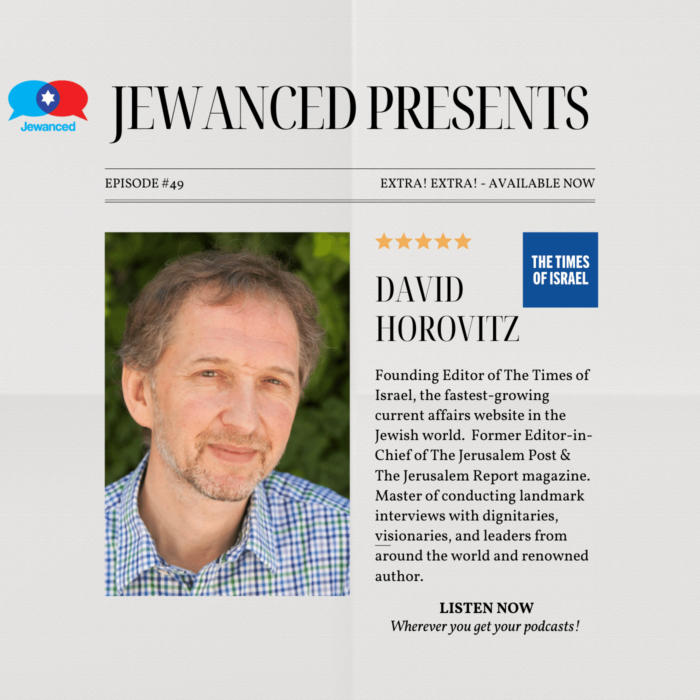 Episode #49 – David Horovitz, Founding Editor of The Times of Israel

DAVID HOROVITZ – THIS WEEK ON JEWANCED

In today’s media landscape where it’s increasingly difficult to tell facts from fiction and where finding a trustworthy news source seems as challenging as running a marathon (fake news anybody?), The Times of Israel’s founding editor David Horovitz truly is an anchor of authenticity and a real source of stability for our times. Listen to our fascinating interview with him on this week’s episode of the show.

Horovitz was previously editor-in-chief of The Jerusalem Post (from 2004-2011). Before that, he was editor and publisher of the award-winning news magazine The Jerusalem Report.

He has written from Israel for newspapers around the world, including The New York Times, Los Angeles Times, Irish Times, and (London) Independent, and is a frequent interviewee on CNN, the BBC, Sky, and other TV and radio stations.

He has conducted landmark interviews with a succession of Israeli and international figures, including all of Israel’s recent prime ministers, Presidents Barack Obama (when he visited Israel as a candidate) and George Bush, as well as Tony Blair, Vladimir Putin and, to the particular delight of his children, Paul McCartney.

Horovitz is the author of 2004’s “Still Life with Bombers: Israel in the Age of Terrorism,” and 2000’s “A Little Too Close to God: The Thrills and Panic of a Life in Israel,” both published in the US by Knopf.

Visit The Times of Israel

Read David’s articles at The Times of Israel

David’s book “Still Life with Bombers: Israel in the Age of Terrorism” on Amazon

David’s book “A Little Too Close to God: The Thrills and Panic of a Life in Israel” on Amazon