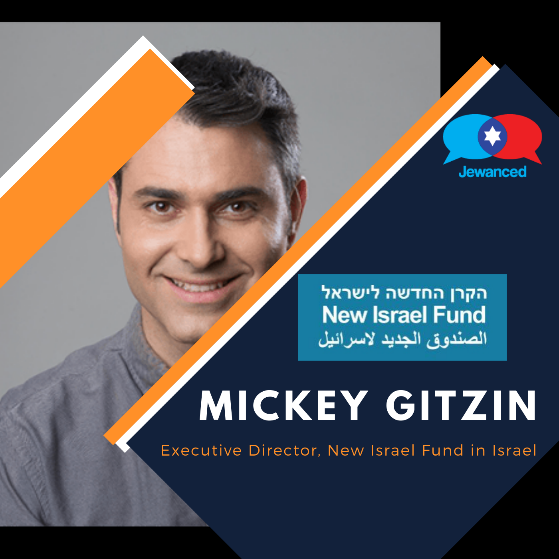 The NEW ISRAEL FUND and the Israeli Left – Few other NGO’s in Israel conjure up stronger feelings than the NIF. Subversive anti-Israel front or patriotic agent for social change and justice?

What really is the NIF (apart from one of the best examples of ‘Jewance’ that we can think of) and what does the organization truly stand for?

Moreover, as we just had our 4TH ELECTIONS in Israel this week, what happened to the Israeli left and where is it going? We sit down with MICKEY GITZIN, Executive Director of the New Israel Fund in Israel, and leading thinker, voice and leader of the Israeli political left, to set the record straight.

Mickey Gitzin is Executive Director of the New Israel Fund in Israel. He served as a city council member in Tel Aviv-Jaffa, where he chaired committees for diversity and public housing. He was also the Mayor’s advisor for global development and innovation.

Prior to joining NIF, Mickey was the founding director of “Israel Hofsheet” (Be Free Israel), a leading grassroots organization fighting for separation of religion and state in Israel. Previously, Mickey was the spokesperson for MK Ilan Gilon (Meretz) and the Associate Director of “Festival BeShekel,” an organization advancing arts and culture in Israel’s geographic and socioeconomic periphery.

After completing his military service as an intelligence officer, he served as a shaliach (emissary) in South Bend, Indiana for the Jewish Agency for Israel.

Mickey holds a Master’s in Public Policy from University College-London, for which he received a Chevening Scholarship from the British Foreign Office and the British Council.