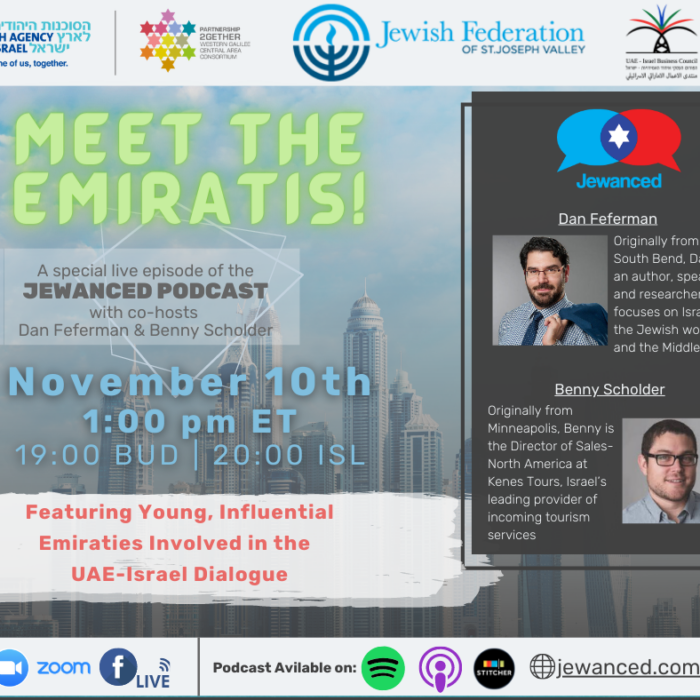 Join Jewanced for an unforgettable conversation as Benny and Dan host a panel of truly amazing Emiratis to learn about life in the UAE and their feelings about their country’s new normalization with Israel under the Abraham Accords.

Following the ratification of the Abraham Accords, what can we anticipate for the people of Israel, the UAE and Bahrain, as well as for the broader Middle East?

May is an Emirati food blogger and culture expert, based in Abu Dhabi. She is a co-authoring a cookbook about kosher Emirati cuisine called ‘Kosherati’, together with Dubai-based Elli Kriel, the creator of Elli’s Kosher Kitchen, the UAE’s first kosher catering business.

Thani is a prominent young Dubai-based businessman where he serves as the vice chairman and deputy group managing director of the Oasis Investment Company. He is a co-founder of the UAE-Israel Business Council.

Based in Dubai, Norah is a popular Emirati social media influencer. Bursting with positive energy, she is very active in many groups promoting the UAE-Israel relationship and people-to-people connections between the two nations. Notably, Norah became the face of the historic Abraham Accords in the UAE when she was featured as the Emirati woman in the viral UAE-Israel flag photo taken against the stunning backdrop of the Burj Khalifa and Dubai skyline.

Link to an article about the famous UAE-Israel flag photo

Ahmed serves as a forensic investigator with the Abu Dhabi police. Since the Abraham Accords were signed, he has made it his mission to learn as much about Judaism, the Jewish People and Israel as possible and is truly excited to see the developing relationship between the two peoples and countries exceed all expectations.

For this episode, we are proud to collaborate with our partners:

Be sure to watch our LIVE RECORDING of this episode on YouTube!