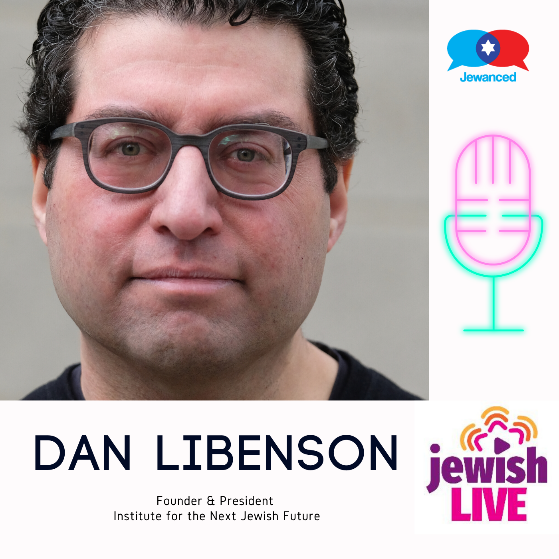 Episode #42 – Dan Libenson, founder & president of The Institute for the Next Jewish Future & co-host of the Judaism Unbound podcast

Our guest this week, Dan Libenson, gets up each and every day and does just that – for the Jewish world.

Dan Libenson is founder and president of the Institute for the Next Jewish Future, co-host of the popular Judaism Unbound podcast, and co-creator of jewishLIVE, where he co-hosts the weekly live-streaming video series “The Oral Talmud” with Benay Lappe. He’s also the co-creator of “Text People,” a new project making Jewish texts maximally accessible to a broad audience through short videos and other media.

Dan translated The Orchard by renowned Israeli novelist Yochi Brandes, a novel about the early days of Rabbinic Judaism, and was the translation editor of The Secret Book of Kings by the same author, a radical retelling of the stories of the early kings of Israel.

He spent over a decade working with Jewish students on campus, at Harvard and at the University of Chicago, for which he received numerous awards, including Hillel’s Exemplar of Excellence Award and an AVI CHAI Fellowship. Dan is a graduate of Harvard College and Harvard Law School and spent five years as a law professor. He lives in Chicago.

The Institute for the Next Jewish Future. Founded by Dan Libenson, the Institute is a hub for ideas, education, and action dedicated to accelerating bold innovation in Jewish life.

The official Judaism Unbound podcast website. Co-hosted by Dan Libenson and Lex Rofeberg, Judaism Unbound is a project of the Institute for the Next Jewish Future that catalyzes and supports grassroots efforts by “disaffected but hopeful” American Jews to re-imagine and re-design Jewish life in America for the 21st century.

Listen to Judaism Unbound on Spotify

Check out Text People, a new project co-created by Dan Libenson which makes Jewish texts accessible to a broad audience through short videos and other media.

Buy The Orchard by Yochi Brandes

Buy The Secret Book of Kings by Yochi Brandes