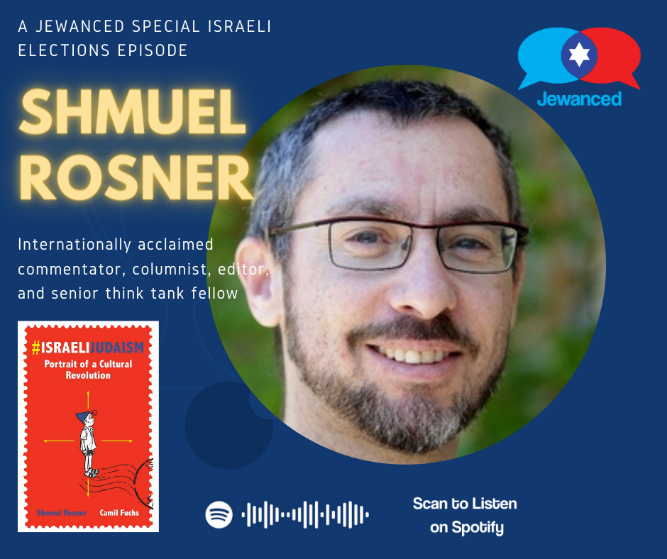 Like with every election in the world’s only Jewish democracy, Israel’s elections come with tons of questions. What are they about? Who’s running? Why are there always so many new parties running in every election?! What do polarizing terms like ‘left’ and ‘right’ mean in Israel anyways?!

Worry no more. This episode with the one & only Shmuel Rosner goes a long way in answering all your questions!

Shmuel Rosner is a Tel Aviv-based commentator, columnist, editor, and senior think tank fellow. He is a senior fellow at The Jewish People Policy Institute (JPPI) and the non-fiction Editor for Israel’s largest Publishing House, Kinneret-Zmora-Dvir. Shmuel is Senior Political Editor for the Jewish Journal and writes the popular blog Rosner’s Domain as well as a weekly column for The International Herald Tribune/New York Times and Israel’s Maariv daily. Rosner was previously a columnist for The Jerusalem Post and was Chief U.S. Correspondent, Head of the News Division and Head of the Features Division for the Israeli daily Haaretz. He wrote for many magazines, including Slate, Foreign Policy, Commentary, The New Republic, The Jewish Review of Books, and others. Rosner’s book “Shtetl Bagel Baseball, on the Wonderful Dreadful State of American Jews” became a bestseller and his most recent book (co-authored with Camil Fuchs), “#IsraeliJudaism, Portrait of a Cultural Revolution” proves that Israel’s Jews reinterpret Judaism by mixing tradition and national identity, making questions of continuity obsolete. In 2021, Rosner joined Kann-News (Israel TV’s channel 11) as news commentator. He also recently founded and is the editor in chief of a data-research website, Hamadad, that investigates and reports on Israeli politics, society, identity, and culture.

For one year (1995), Rosner took a leave from journalism and has volunteered to work as an educator in the Jewish community of Kitchener, Canada (1995).

An American history buff, in the last twenty years Rosner has written numerous pieces about U.S. policy and politics and traveled across the United States covering all American elections since the year 2000.

He is a frequent guest on Israeli television and radio as an analyst of American policy vis-à-vis Israel and the Middle East. When he lived in the US Rosner has lectured in many Universities and Think Tanks around the country – among them Yale, Berkley, Boston University, The Hudson Institute, The Washington Institute for Middle East Policy, American University, The Army War College – and also in many Jewish gatherings and communities.

He was raised and educated in Jerusalem, and he now lives in Tel Aviv with his wife and their four children.